After recently losing Beneficial Mutual as an audit client, Deloitte suffered another major setback last week. While a U.S District Court Judge dismissed racketeering and other claims against the firm made by Marin County as a result of what the Californian authority considered a botched implementation of SAP for Public Sector, the court declared that the county had a plausible claim of bribery against Deloitte.

In the $30M complaint against Deloitte attached below, Marin County alleged that Deloitte had misrepresented its skill and experience to obtain the contract for the implementation, staffed the project with inexperienced consultants and deliberately concealed issues and risks arising during the implementation from the county. This included a practice of under-testing and “truncated, simplistic and incomplete tests that were intended to produce positive results to create the false impression, prior to the go-lives, that the SAP system was in fact ready for production”. It also included alleged bribing of the county official overseeing the project. After the implementation failed to support basic financial, payroll and HR functions, Deloitte offered costly post-production support to the county to address the problems plaguing the system.

The county eventually scrapped the implementation, despite paying $11M in consulting fees, and alleged that Deloitte’s conduct was consistent with the approach used by the firm during similar SAP implementations for public organisations in Los Angeles, San Antonio, Colorado and Miami-Dade.

During initial hearings, SAP declared that it had expressed concerns with Deloitte’s blueprint designs which put the county “at risk of an improperly designed system which could lead to substantial rework … or a re-implementation after go live”.  However, this did not appear to have led SAP to question earlier accolades it had made regarding Deloitte’s ‘depth and breadth of skills and services’ or Service Partner Awards bestowed by SAP to Deloitte.

Commenting on the Court’s decision, County Counsel Jack Govi stated that “the county is confident that Deloitte will be held accountable for its misconduct, which has cost the county of Marin taxpayers millions of dollars”.

The case highlights the importance of selecting the right system integrators for SAP implementations and the problems that arise from misaligned objectives between business partners during transformations. Customers, vendors and system integrators should remain focused on shared objectives rather than their own specific goals which often conflict with those of the project. 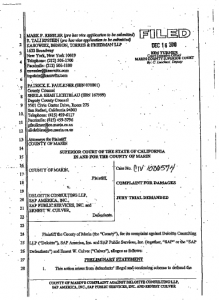